Olympic Theatre Arts Center has unveiled its 2021-2022 Theatrical Season: "Stories of an Irrepressible Humanity", featuring a full lineup of comedy, drama and music that applauds the strength of the human spirit.

"Like everyone else, we had a lot of adapting to do during the pandemic," said Director of Marketing  Pete Griffin. "And while we didn't want to dwell on it, we did want to find a way to celebrate our human capacity to adapt under trying times and sometimes even come out better for it."

A Facility for Living

"When life is too grave to take seriously." A retired actor moves into a prison-turned-elder-care facility shortly after the demise of Medicare and discovers a community of lovable, irascible inmates hell-bent on bucking the dehumanizing system in which they have landed.

"A single night can change everything." We return to the timeless Dickens classic told from the set of a 1940's radio broadcast! Relive your favorite holiday ghostly tale that reminds us how kindness and compassion make all the difference.

a drama by Patrick Hamilton February 10 - 27

"Heed the flickering light. Do you see the light flickering?" This Victorian thriller tells the story of a young wife whose fragile mental state hangs in the balance between her potentially dangerous husband and an eccentric detective claiming to have all the answers.

Heroes vs. Villains: A Musical Revue

"The good, the evil, and the music of it all!" In this musical revue OTA presents the best of heroes and the worst of villains in an all-out musical extravaganza.

The Cover of Life

"Kindling courage in the darkest hours." In 1943, three young wives are keeping the home fires burning while the men are off to war. The local story attracts the attention of Life Magazine.  The Cover of Life is a deeply affecting story about the struggle for self worth, filled with Southern charm and poignant humor.

"This season is a celebration of all we've learned over the past year, and a reminder that through the power of storytelling, humanity keeps on going," says Interim Executive Director Ginny Holladay. "I am particularly excited to be directing Angel Street (Gaslight) with its timeless warnings of how easy it is to destroy someone through mental coercion, and how important it is to give power back to those who need it most."

In keeping with the tradition of previous seasons, OTA has collaborated with local artist to help market the shows. This season's artists are Suzan Noyes, Richard Workman, Ryoko Toyama, Sadie Baar and Jim Bradrick.

All five season productions will be performed on the Elaine and Robert Caldwell Main Stage for three weekends each, leaving the theatre's historic Gathering Hall open for more special events, classes and workshops throughout the season. "We're looking forward to getting more music, story telling, artistic workshops and other engaging activities for the public into the Gathering Hall this season," said Griffin. "We're also revamping our membership concept this year, adding invites to early script readings, select rehearsals and other open house style opportunities. We'd like OTA members to feel more involved in the theatre, so we're looking for more ways to get them 'behind the curtain'. Membership is ownership at OTA, and we'd like our members to really know what they're investing in."

OTA's 21-22 Season Rollout was held at the opening of the community theatre's first annual New Works Showcase on Friday, celebrating the short works of local authors brought to the stage. A short video introducing the season will also be posted on the theatre's website and FaceBook page.

OTA season subscriptions offer the best way for patrons to reserve seats early and are available now. OTA memberships for the 21-22 Season are also available now. For more information go to OlympicTheatreArts.org or call or drop by the theatre office at 414 N. Sequim Ave., (360) 683-7326, Tuesday to Friday 1:00 p.m. to 4:00 p.m. Individual tickets for the general public will be available September 1st. 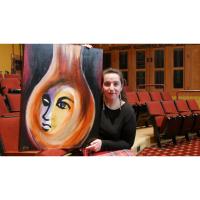